Anhingas are year round residents of Florida and along the coast all around the Gulf of Mexico, Cuba and south throughout Brazil and other South American countries east of the Andes to Argentina. During the summer season the range expands northward throughout the coastal plain of the southeastern United States.
These unique birds are nearly a meter in length with a wingspan of 1.15 m (~45"). They frequently swim with only the head and neck showing, a trait that prompted the name snake bird. Anhingas can be seen perched in trees near water, often with their wings spread. Unlike cormorants, which assume this posture mainly to dry their feathers, anhingas are believed to be thermo-regulating, absorbing solar energy to offset their low metabolism and high heat loss, especially when wet. For more information on this behavior, see this page at the Audubon Corkscrew Swamp website.
A long fan-shaped tail, heron-like neck and pointed beak help distinguish anhingas from cormorants, which also lack the silvery wing patches. 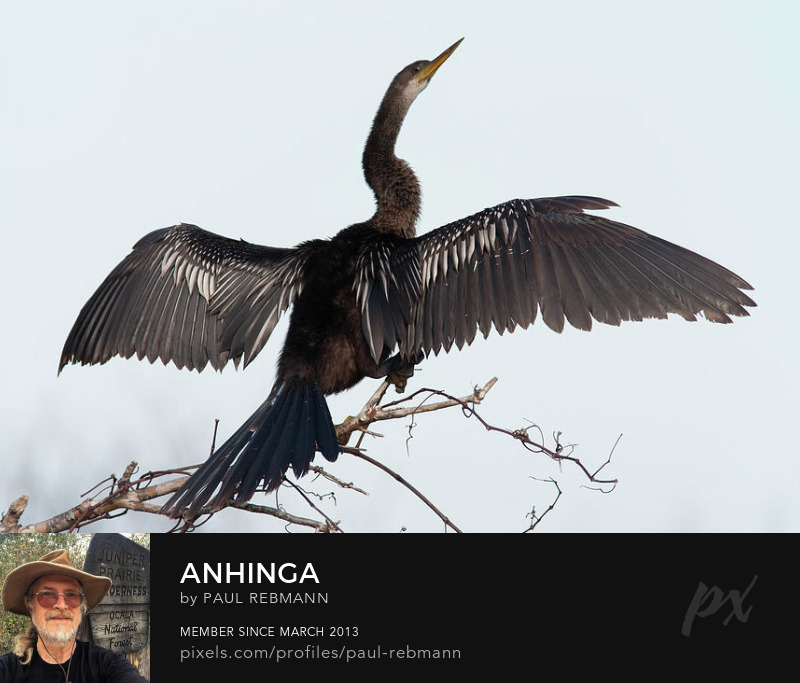 Anhinga anhinga is a member of the Anhingidae - Anhingas and Darters family.

For more information on this species, visit the following link:
Cornell Lab of Ornithology page for this species