This small endangered perennial is found only in Franklin, Liberty & Bay Counties of the Florida panhandle, occurring in wet prairies, seepage slopes, pitcherplant bogs and transition zones into shrub habitat.
Each grass-like plant bears a single flower on a stalk much longer (up to 61 cm or 24 in. tall) than the leaves. Flowers are yellow, with six tepals 9-15 mm (1/3 - 5/8 in.) long, six stamens and a superior ovary. The tepals spread open when in flower, becoming erect and then turning green as the fruit develops. The basal leaves overlap at the base of the stem like iris leaves, old leaf bases are persistent. Leaves are 5-21 cm (2-8 in.) long, narrow, ribbed, pointed and can be flat or slightly twisted.
Originally considered a member of the Lily family, Harperocallis flava has recently been reclassified into the newer Tofieldiaceae family.
The genus is named for Roland MacMillan Harper (1878-1966) who never learned to drive and explored Florida by train & on foot. Harperocallis flava is the only species of this genus and was discovered near the time of Harper's death.
For more information on Harper's beauty visit the Center for Plant Conservation or see the Florida Natural Areas Inventory Field Guide page(pdf) for this species. 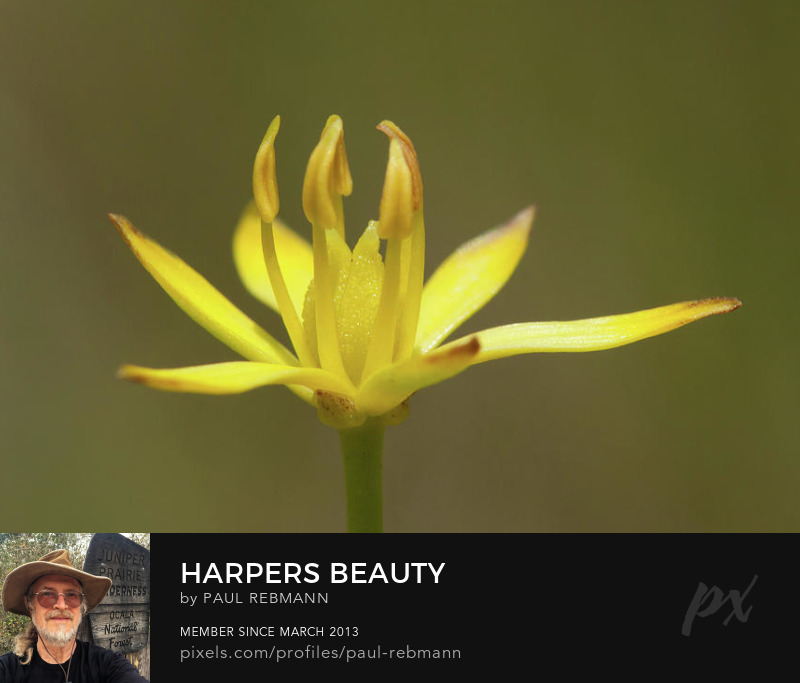